My senior year in college, my friends and I were looking for a place to rent and should have heeded the old warning “if it seems too good to be true, it probably is”. A professor let us know about an old carriage house (from the 1800s) she was renting out. It was beautiful and a really great price for students so we jumped at it.

Just after moving in, we were all eating breakfast together and we started talking about how we were all having crazy scary dreams and most of us were getting really creepy vibes in the house.

I was repeatedly having the most disturbing feeling each night when I got in bed like someone was pushing down on me or holding me down and there was nothing I could do to stop it. I could get up and move but it felt like a real mental challenge to remind myself I was able to move.

My room was on the first floor and everyone else was upstairs. Whenever I was alone in the room it felt like someone was watching me whether I was in the shower, at my desk, getting dressed, I never felt alone. It was so creepy that I stopped doing anything in my room. I would go to the library or literally anywhere else to get things done.

I never saw anything, but my roommates did. One of my roommates had a can of powder that was sitting on her dresser fly across the room in front of her while she was there. My other roommate was once home during the day doing work and suddenly everything flew off her desk as though an arm had swiped it all off – computer, books, television, everything.

One time we were all downstairs and we could all hear someone walking up and down the hallway upstairs. The footsteps were super clear, we all heard it, but there was no one up there.

Whenever we had guests over, especially men, things would get worse: cabinets would open and slam shut, things would fall off counters, doors would slam.

After our first bad week in the house my roommate who had found the place went to the professor who had told us about it and explained we were experiencing weird things. The professor’s response was “oh, I thought you had heard the stories before you rented it.”

She went on to say she didn’t believe in ghosts so she was no help at all.

Apparently, we were the fifth group of students to rent the house, and we were the first group to not call the police in the first week because of all the strange sounds.

We found out the owner of the house had taken the chandelier out of the dining room because it kept falling down. It fell on a particular boyfriend of one of the previous tenants every time he went to the house. The landlord had it professionally reinstalled more than once and there was nothing wrong with it. She finally just removed it.

The basement door had a padlock on it because there were “problems” with it according to the landlord who didn’t believe in ghosts. I went down there once when we first moved in and swore I would never go back.

It was an awful year. It was impossible to feel safe in that house. 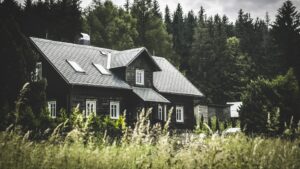